Another day of exploration

The original plan was to go north from where I’m staying in Mimbres and then drive up McKnight Road into the eastern part of the Gila Mountains. However, I discovered I would have to drive through the Mimbres River. I got out, looked at the depth and width, and decided, eeeehhh, I might be able to make it just fine, but I’m not in the mood to try it.

So I continued north on the highway to North Star Road (state road 150). No water crossing required. The first part of this unpaved road, from the valley up to the 7,000± foot ridge, had some bad washboard, then things smoothed out quite nicely. Spur roads and dirt tracks through juniper trees led to many dispersed camping sites, often with two or more bars of Verizon signal. (General cellular rule: good signal on ridges, little-to-no signal in ravines.) 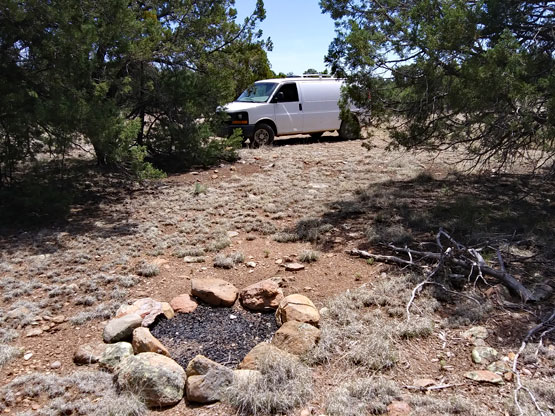 North Star Road becomes state road 61, running over 50 miles through the southern Gila Mountains, crossing the Continental Divide Trail along the way, dropping in and out of pine-filled gullies.

I had crossed over the divide when I thought to check my gas gauge. Doh! I had forgotten to fill up before setting out. I had a quarter tank, which always seems to disappear faster than any of the previous three quarters. Hmmm, where would the closest gas be and how far could I get before running dry? I did the arithmetic. Thirty gallon tank divided by four equals seven-and-a-half gallons. At about sixteen miles per gallon I could get something like one hundred-twenty miles. Since I’d be coasting downhill at least part of the way, let’s say a hundred-forty miles. Could I count on there being gas somewhere to the east, north or west? How far? Or do I play it safe and turn around? Caution won the day.

On the way back there was a spur road and a sign stating MIMBRES RIVER 1 MI. I had enough gas for that diversion. The road got narrower and lumpier, then even narrower—essentially one lane—as it switchbacked down to the river. I could see a roomy dispersed campsite ahead, surrounded by pines and cottonwoods. I chuckled because I’d need to drive through the same river that had thwarted me earlier. But the water was much shallower. No problem. 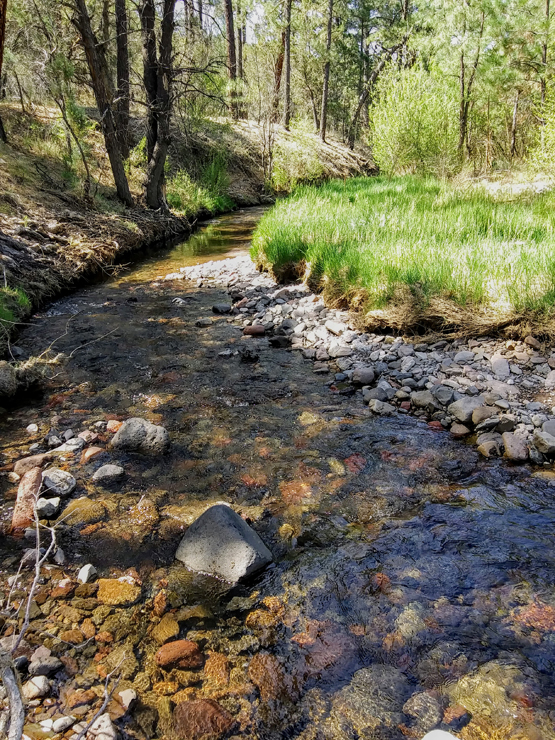 Ah, such a nice place to spend the day.

Then other people started arriving. A couple of moms with kids. An angler. Two more that left when they saw we were already there. Popular place. My mellow was becoming harshed.

I got thinking about that very narrow road. And the drop-off on the switchbacks. And encountering oncoming traffic. And how I suck at backing up. I decided I should probably leave.

As I topped the switchbacks and got to where the road widened just a bit, a truck came the other way. Then, just before North Star Road, a mini convoy of three Tahoes rolled past me in a cloud of dust. I was glad I didn’t meet them on the switchbacks. It seems I have good luck with these things.