I was at Mammoth Lakes, California, wanting to get to Taos, New Mexico. Sooner rather than later. But several obstacles were in the way (because that’s what obstacles do).

There’s the Mojave Desert, which is almost as hot.

There’s Las Vegas. Sometimes I go there on purpose, but I’d rather avoid the traffic. And the heat. Traffic and heat are a bad combination.

Grand Canyon is in the way.

Lake Powell is in the way.

There’s the Navajo Nation, which is closed to outsiders because the the pandemic.

I’d need to go way out of my way to bypass the Navajo Nation on the north, because while there are roads that run sort of north and south through Grand Staircase-Escalante and Capitol Reef, there’s a shortage of ones running east and west.

I decided to brave the Mojave because it’s familiar. I know where gas and assistance are along the way.

I left Mammoth Wednesday afternoon and went south on US 395 to Lone Pine. Not much of a bite out of the trip, but it would shorten Thursday’s drive a little. And I knew I could boondock at Alabama Hills.

I headed out very early Thursday morning, continuing south on US 395 to Kramer Junction, then east to Barstow. It was noon by then and 102°F/39°C. I grabbed a burrito, prepared my mind, and got on I-40. Into the oven.

Now, this shows what sort of half-crazy, half-smart guy I am. I drove through the Mojave Desert, in the heat of the day, with the air conditioning off. Just the windows open. Old school, like when I was a kid. Because I’d rather it was me getting overheated than the Rolling Steel Tent’s engine.

It got hotter and hotter, from uncomfortable to stinging. But at least I had the shade of the roof and wind coming in the window. 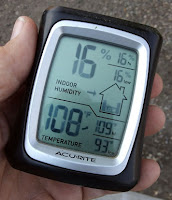 But the van and I made it. Now I’m in a hotel in Kingman, Arizona. No way I was going to try boondocking in this heat. And I needed a shower.

Tomorrow I’m going to Grand Canyon. It’s cooler and prettier. And now it’s sort of on the way instead of in the way.