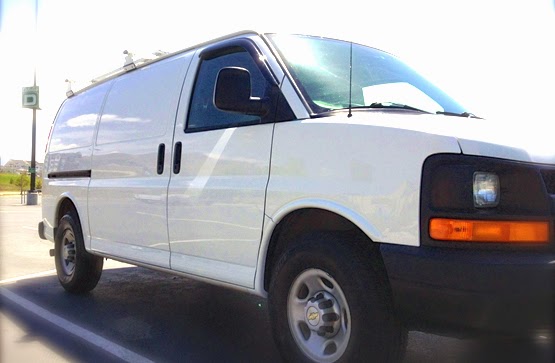 Woo! The Rolling Steel Tent is back! A day early. And the work was done right.

Not only does the door now open all the way, not only is the dent gone, but they also buffed out the entire vehicle. They must have read my mind. After I had placed my home in the hands of the Progressive Insurance service center, who would deliver it to one of their trusted repair shops, I thought, "Doh! I should have asked them to buff out the bush/tree scratches and the ghosts of the former owner's business decals." Well, thank you, Shine Collision Repair in Murray, UT. You knew the van would look bad with only the door and fender shiny and new.

When I worked in advertising, too many clients thought victory went to those who could out-hype, out-BS their competitors. That was short-term thinking. They might convince people to buy the sun, moon and stars they promised, but only once before buyers realized they'd been lied to.

On the other hand, under-promising and over-delivering leaves customers delightfully surprised. The product or service was even better than they expected. That's a long-term approach to marketing. Build loyalty and word of mouth. The problem, though, is actually being good at what you do.