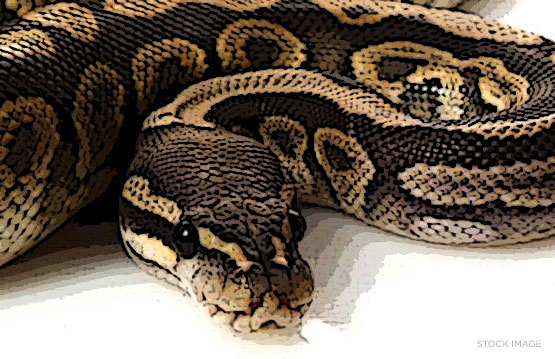 I was visited by at least one mouse when I was at Joshua Tree. I smelled it, then heard it scritchy-scratching away at a bag of tortilla chips. It scurried off when I shined my flashlight on it, but I couldn't tell whether it left the van. Probably not.

The next couple of nights seemed mouse-free, but last night the odor was very strong. Was it the same mouse or a new one? I hunted around and saw nothing.

I emptied a lot of stuff out of the Rolling Steel Tent this morning and found a few mouse poop pellets under the bed. I cleaned them up and scrubbed the floor and cupboard interior. Hey, as long as it didn't chew any wires under the hood.

Now, some people would suggest a cat. Maybe a small, skinny one that could squeeze into the van's nooks and crannies. But I'm slightly allergic to cats. And litter boxes smell as bad as mice. And too many of them end up as coyote snacks. (They were howling last night.)

But a snake might be the thing. Clean, quiet, able to go wherever mice do. Much lower vet bills. And I could get a badass snake tattoo. The trick would be keeping the snake from slithering away in the night instead of staying on mouse patrol.