Where am I going, and is it a good idea?

There are many times I prefer an empty road. Peace, solitude, decreased chance of a collision, etc. But there are times when it makes me anxious. Like when I went exploring in the Gila Mountains this morning.

I had a good idea where I wanted to go: from Mogollon to Preserve via National Forest fire roads. I had studied the atlas and Google maps, and there were squiggly lines going from Point A to Point B. Too many lines, some of them leading the wrong way, some leading to dead ends. The atlas showed which parts were unpaved, but there are degrees of unpaved, ranging from smooth as pavement to passible only by goats. I decided the only way to know for certain was to just go.

The forest road out of Mogollon features a sign advising high-clearance vehicles. But how high is high? The road is rather narrow and littered with small stones. But no mud or sand, no ruts, and only brief patches of washboard. As I drove, I thought, okay, this is doable. For now. But what if it gets a lot worse? What if I realize it’s too gnarly for the Rolling Steel Tent and me only after I’ve passed the last place to turn around? What if something breaks? 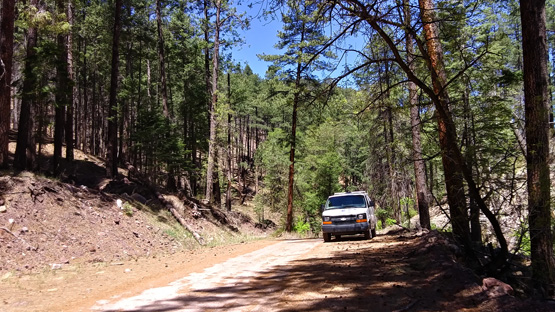 A couple of miles along I came upon a couple with a pickup, standing by the road, looking at the scenery. Okay, I thought, so I’m not the only fool up here. And if I have some sort of trouble, they’ll probably be along and might help me. I relaxed a little.

Not long after, the couple caught up with me. I sensed I was going too slow for them, so I pulled over at a wide spot and let them pass. Oh no. Now what if I needed help? The road hadn’t gotten bad so far, so maybe things would be fine. 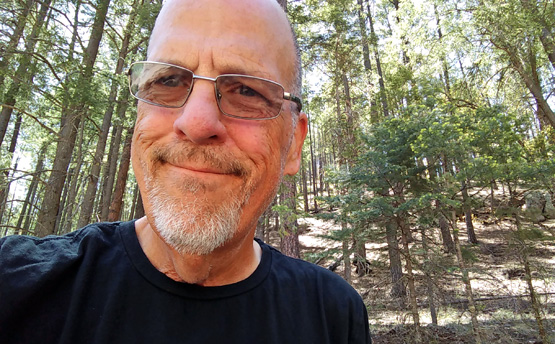 It’s a nice day up among the conifers

I continued on, becoming more confident as the road got no worse, enjoying the adventure.

Then I came upon a couple of guys in an official looking truck. I thought they might be there to stop me, turn me around, because of conditions ahead. They just gave a nod and a little wave. Cool.

Around a couple of bends I saw why those guys were there. A front-end loader was smoothing the road and shoving fallen trees and rocks out of the way. Ah, so this little fire road was important enough to maintain. People besides crazy retired van bums use it. As if to demonstrate that point, a lady in a Nissan Merano came from the other direction. And then a couple of dudes in an old Tacoma. (There are always dudes in old Tacomas in the forests and deserts.) Then a rancher in a Silverado. And another in a Ram. Yay, I’m not alone up here! 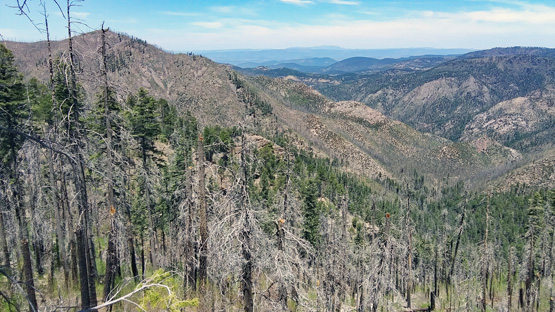 Perhaps best of all, there were directional signs. As if they expected bozos like me to wander up there without knowing the way. Signs! Pointing to my destination. Reserve, that way. Yes. Thank you very much.

So my just-go-and-find-out strategy was successful. I suspect I’ll be exploring more of these mountain roads. At least until I get too confident and end up in a fix.