A van, another van, a load of laundry, and the question man 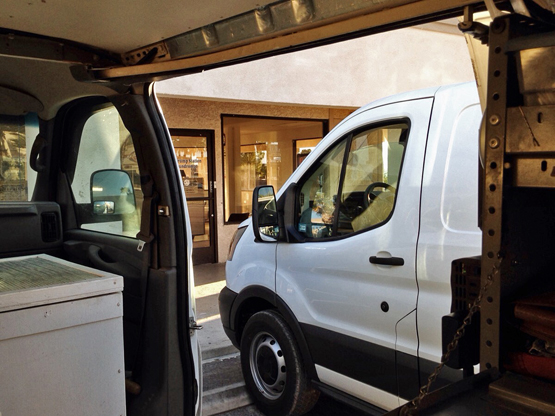 It  was laundry day. Woo-hoo. The plus side: clean clothes, including new jeans (shorts weather is on its way out). The minus side: killing time while the machines do their wet, soapy work.

I was reclined in the Rolling Steel Tent, thinking deep thoughts (deep for me, anyway) when the owner of the Ford Transit I was parked next to popped his head in the door and started asking questions about my setup. Okay, no problem.

The thing was, he had an odd hitch in his speech that made him difficult to follow. I became uncomfortable. But then I realized, hey, he can't help it. It might make life harder for him. It might make it tough to make friends. It might even affect his ability to find employment. My discomfort was nothing in comparison. So I chilled as best I could.

The bigger issue, though, was that he'd ask questions then keep talking while I tried to answer. It was like he had all this stuff that needed to get out of his head. It was annoying, but, again, I realized he probably couldn't help it, that he probably had some misfiring circuits in his brain.

I thought our conversation was finished, but then he appeared at the back door with more questions and tangental monologue. I had to chuckle. But he soon bid me a good day, got in his van and left.