Mouse in the house

The Rolling Steel Tent makes noises as its various materials and contents cool for the night. Clicks, pops, pings, sighs, moans, mumbled complaints about the state of the world... But last night there were also the rustlings and scratchings of a critter. And the smell of mouse.

I tried making louder noises myself to scare it away. But the mouse kept coming back. So I got up and turned on some lights to figure out where it was. Yup, in the trash can. 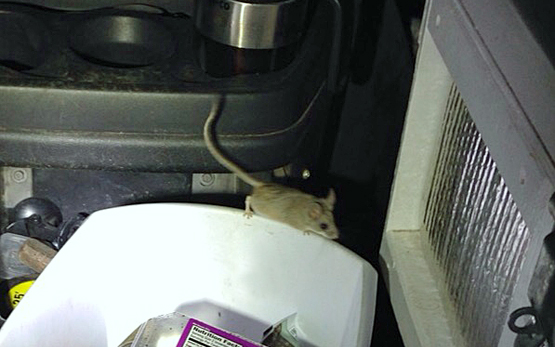 Now, I don't mind a mouse eating a few morsels of my scraps and then moving on. But this one kept scurrying into the gap between the dashboard and engine cover. I didn't want it homesteading in there. Or developing a taste for wiring.

So when it was deep in the trash can, I plopped my Benchmark Atlas for California across the opening. It was just large enough to seal it closed. Then I took the trash can outside and freed the mouse, which promptly ran under the van. No sooner had I put the trash can back in its place than the mouse was back. What, five, six seconds to make its way through an opening (probably the heater ducts) to the dashboard? (Maybe that's why it's called a dashboard.)

After I grabbed my phone to get a picture (remember back when that phrase would make no sense?) we started a game of cat and mouse. Or man and mouse. It kept dashing in and out of the trash, in and out of the dashboard. But my patience won and I finally trapped the critter again. But rather than take it outside, I put a heavy weight on top of the atlas and went back to bed. "Eat to your heart's content, mouse."

After sunup I took the weight, the atlas, the trashcan and the mouse outside. Once free, it ran for the closest cover, which was the van. Of course. So this adventure isn't over yet.