Shortly after I bought the van that would become the Rolling Steel Tent, I was driving down a mountain pass at about 50 miles per hour. Whenever I'd apply the brakes, the front wheels would shimmy. Violently. I thought it was an alignment problem. I went to a tires-brakes-alignment place in Rapid City, South Dakota, to have the problem diagnosed.

"Your rotors are warped," they said.

"We can replace them or true them."

Truing is when they put the rotors on a lathe and trim them until they're flat again. It's a temporary fix. It makes the rotors slightly thinner, which isn't the best thing. It also means the rotors heat up faster. Heat is what causes warping. and since the rotors are thinner, they warp more easily. I opted for truing, though, because I wanted to save money.

Everything was fine with the brakes until the past few months. When I was in Colorado, going down a lot of steep grades, the rotors would heat up and warp a little. But after driving a while without any heavy brake use, it felt like the rotors cooled back to being flat. There was no pulsing in the brake pedal, no shimmy.

Even so, I talked to Forrest, my mechanic buddy, about replacing the rotors while I was helping to build his cabins.

But I never got around to it. After all, the brakes were working fine.

Then, a week ago, as I was coming down the eastern side of Tioga Pass, with its 8% grade, the brakes started to warp very badly. Even though I was in second gear. Even though I'd apply the brakes only in short bursts. The next day, after the brakes had cooled, I could still feel a light pulsing in the pedal. Okay. It was really time to replace the rotors. 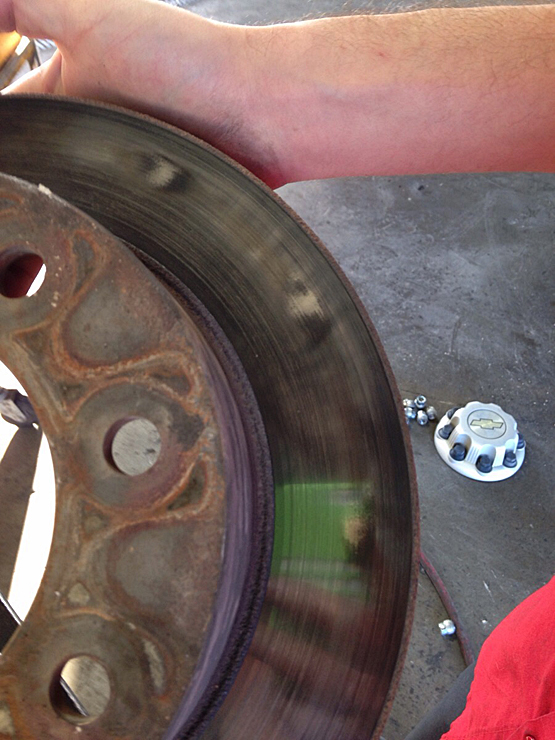 Above is one of the old rotors. Those shiny spots are bulges in the metal and shouldn't be there. Below is the new rotor peeking out from behind the wheel (a wheel wrapped in new rubber). The fine crosshatching helps break in the new pads. Then in it wears off and the rotor becomes smooth. 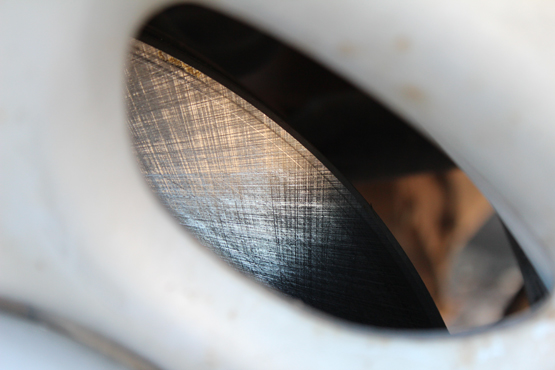 After they had everything installed, the tire shop also checked the alignment.