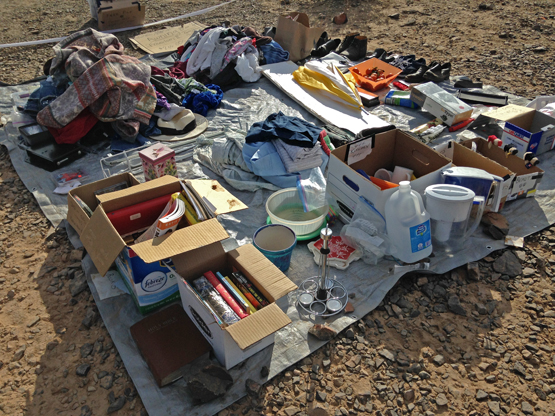 This is the free pile at the Rubber Tramp Rendezvous. Attendees leave things they think others might want or need. Some of the free stuff is good and useful. Some isn't, but the ones who left it can't bring themselves to just throw it out. At least their hearts are in a good place.

It's easy to give to people I like, people I approve of, people who pass whatever worthiness tests I might have at the moment. That's almost not giving. With the free pile, I'm putting it out there for... whomever. Maybe someone stone broke and in desperate need will get it, but maybe someone who could easily afford to buy the stuff will take it, or maybe someone who'll resell it, or maybe someone I hate. That's difficult, but I believe if I'm going to give, it should be with no questions asked.

I'd rather give more and judge less. I judge too much. It makes me hard. It requires me to be suspicious. It's a burden. Maybe I could lighten my load by putting a big sack of judgment on the free pile. Sadly, there's probably someone who'd take it.