I drove from Yuma to Quartzsite today with the intent of meeting some new people. Sort of like self-prescribed therapy for the socially awkward. The general idea was to stay at least until Christmas.

However, one of the new people I met and had a nice conversation with mentioned that it had been near freezing last night and was forecast for below freezing tonight. It had clouded over, the wind was becoming more insistent, and the temperature was already dropping. “Why did you leave Yuma? It’s warmer there.” Good question.

The answer was to pack up and return south, and to a lower elevation. I had to hustle in order to make it to my preferred boondocking site before sunset. I don’t have those super bright off-road lights, so it’s tricky seeing the turn from the highway and not ending up stuck in a wash.

I made it just before the sun dropped behind the mountains. Moments later the clouds lit up as if to say, “Welcome back.” 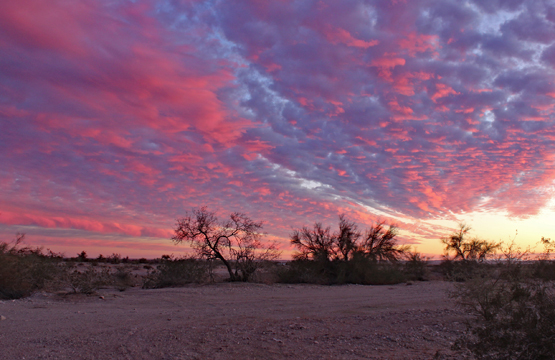