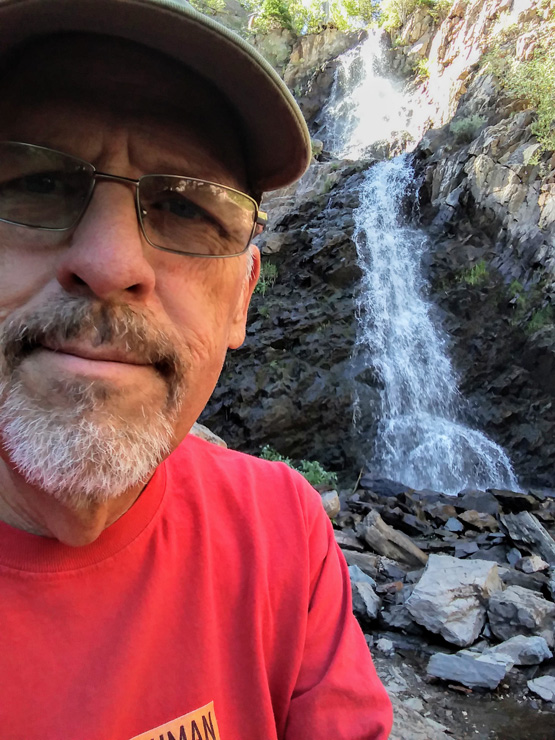 The trail beckoned. A short walk from the trailhead to a nice waterfall. Then, more trails leading up the side of the canyon and into mountains. Sure. That’ll be fun.

Well, the first hundred yards or so of steps and switchbacks were very steep. Hell, the first ten feet had me rethinking this whole mountain hiking thing. Whoa, (huff-puff) did I leave my strength (wheeze) and stamina (moan) back in the Rolling (gasp) Steel (stop, rest) Tent? Or is Post-Cancer Man just not ready yet? Give up or continue?

Um……………. Continue. At least to the end of this switchback.

……………. Oh, there’s an observation deck after the next section. I can make that. I think.

A moment later, a family with small kids came down the trail from the opposite direction. Skipping and jumping, as happy kids do. Then a group of twenty-somethings. One of the fit, energetic guys asked, “Hi. Are you okay?”

“Just being an old man.”

The trail did flatten, mostly. Tricky footing here and there, a water crossing, a couple of moments where I wished I’d brought my pole. There were forks I had to figure out. Which one for the long loop and which for the shorter? When in doubt, take the lower one.

I took my bearings. “I should be near the top of the waterfall. This is the creek and… Yeah, over there.” I could see where others had scrambled off-trail, and where the forest opened into sky. “I’m going to try to get right to the edge.”