Somewhere between a celebrated failure and an utter disaster

IT STARTED WITH A HASTILY DEVISED PLAN

I had made a commitment to meet up with a friend in western Oregon. I was in Idaho Falls. After considering my options, I decided to just blast across southern Idaho on the Interstate instead of taking a slower, longer, more scenic route.

I would be passing Twin Falls. Hmmm, besides once having been the hometown of a college friend, it’s where Evel Knievel attempted and failed to jump Snake River Canyon. I looked it up. There’s not much left except a small monument and the deteriorating remains of the dirt ramp. Why not go? It would make a fun blog entry.

What I hadn’t learned was access to the site is through Shoshone Falls Park. It was Saturday and traffic to the park was backed up. And there was a five dollar entry fee. Screw that. It didn’t want to see the jump site that much.

NOT IN A STATE OF BLISS

I had been in this part of Idaho my first month as a nomad. Back then I had stopped to photograph myself next to the sign for the town of Bliss. I was very happy to be starting my new life. It would be appropriate to recreate that picture—especially since I can’t find it now. Lost bliss. I exited the Interstate and… the sign was gone. Well damn.


YOU CAN’T GET THERE FROM HERE

I had read a blog about boondocking at the Morley Nelson Snake River Birds of Prey National Conservation Area. It would be an interesting place to spend the afternoon and night.

In Bliss I punched the MNSRBoPNCA into Google Maps and headed off through farm and grazing land. A somewhat boring drive suddenly got my attention when Maps told me to turn onto a road that wasn’t there. And since I didn’t/couldn’t turn, it told me to take the next road, which also wasn’t there. And then it wanted to send me down a “road” that was only someone’s driveway. The Maps voice seemed a bit disgusted with my inability to follow simple instructions, then plotted a new route, which took me almost to Nevada and then nearly to Oregon. I saw much more of southwestern Idaho than I had ever planned. Or desired.

So there I am, cruising through more farm and grazing land, when I crest a hill and see… What the… Is that? It was. 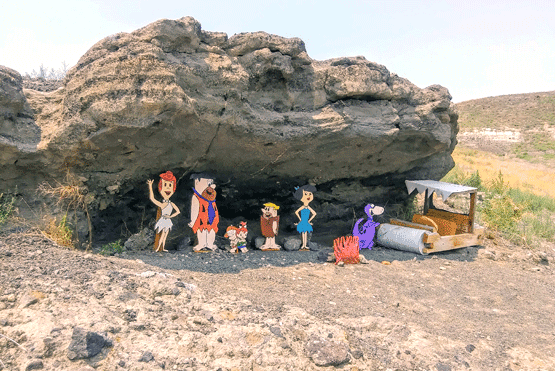 Wilma and Fred are about a foot tall

It impresses me when someone has a fun idea and goes to the time and trouble of turning it into reality. And I love it when stuff like this is in unexpected places. A roadside shrine on a highway used only by a couple hundred locals and those unfortunate souls misdirected by Google? Sure, why not?

About the time I figured I must be in Nevada, there was an Idaho historic marker. All I could read as I passed was the title: An Utter Disaster. Was that a warning? Or had I driven into the future and the marker was actually about my day’s wanderings?

I finally made it to Swan Dam, in the Morley Nelson Snake River Birds of Prey National Conservation Area (hell of an unwieldy name), and despite it being Saturday, I was able to snag a campsite. 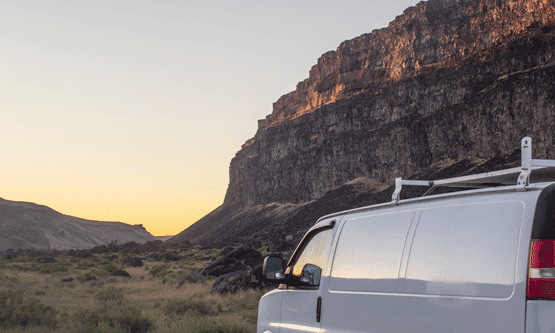