I lost my cell signal Friday evening when the rain started. Fortunately, I had Season 5 of Better Call Saul to binge watch.

I woke up Saturday itching to move on, head out, hit the road, make my way toward the Big Horn Mountains. And supplies. And laundry. And a shower. So I went to Billings.

All cleaned up and restocked, the next issue—a trickier one—was where to camp. Two things complicated the choice. The first was that the closer one gets to the western sides of Montana and Wyoming, the more one gets into extremely popular vacation and recreation territory. Competition for boondocking spots increases. The second was that it was the weekend, doubling the difficulty factor. I did my research, decided on a destination, and crossed my fingers.

Itch-Kep-Pe City Park, in Columbus, is on the Yellowstone River. My hopes sank as I drove in. It looked mighty full. I cruised the first loop. No vacancies. I continued on to the second loop. Things didn’t look any better there. But, surprise, there was a spot down at the end, away from the river, that was actually rather secluded, considering. 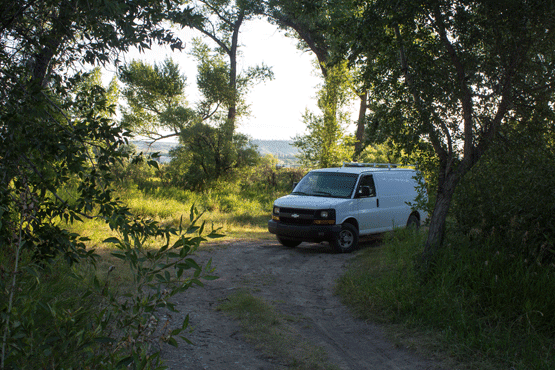 It has worked out well, so far. The neighbors have behaved, the generator users aren’t too close, trains passing through didn’t blow their horns much, bugs haven’t been a problem, I slept well, and I have a good cell signal. And luck.