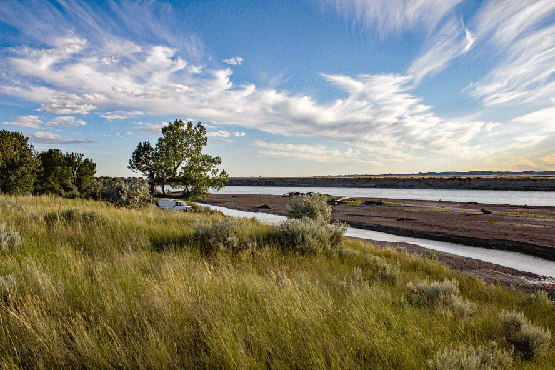 The last bit of “road” into the last night’s camping spot was a short, steep collection of boulders and potholes. But gravity did its thing, and other than bouncing around and rearranging the Rolling Steel Tent’s contents, it was not a big deal.

However, I worried about getting back out.

In the afternoon an angler leaving the fishing access in a pickup spun his wheels. A tire had dropped into a pothole and was up against a big rock. He had to back down, switch to four wheel drive or turn on his locker, and give it another go.

Hmmm, I don’t have four wheel drive. In fact, with an open differential, I really have only one wheel drive.

Another guy arrived later to stare at the river a while and decompress from work. It took him two tries to get up the hill in his four wheel drive truck.

Oh man. Was I going to be stuck there? Would I need to be towed out? And what if it rains and everything gets muddy? I didn’t sleep well.

This morning I thought, okay, I need to know what will happen. I studied the hill. It looked like I could avoid the worst rocks and holes if I hugged the left side and then quickly switched to the other side at just the right spot. If I didn’t lose traction. If I didn’t get caught on a rock.

I secured all my stuff, crossed my fingers and gave it a go.

Except for one nanosecond of tire slip, I drove/bounced/shook right up the hill. Yay me! Yay Rolling Steel Tent! Yay Cooper all-terrain tires! Yay luck!