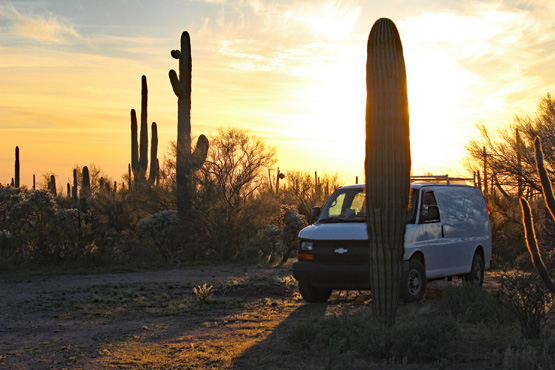 The Campendium listing warned one of the boondocking spots here, backed by a hill, served as a range for fire arms hobbyists, so I knew it was just a matter of time before they showed up.

The first shooter wasn’t so bad, even though he was using a high powered rifle. It was loud but he shot only one round at a time, five or ten minutes apart. He must have been there to adjust his sights. About a dozen shots in all. He was not being a jerk.

The next day brought a group that must have been gifted a truckload of ammunition to waste. And beer. Woo-hoo, shoot the shit out of shit! Second Fucking Amendment, motherfuckers! But they left as the sun was setting. I was so glad they didn’t have night scopes.

As much as I loved my beautiful, lush cactus forest, it was time to move on to somewhere more peaceful. (Besides, my cell connection there was erratic.) Michael had given me some tips on places nearby, and I know how he hates having anyone within eyesight or earshot, so it was certain to be quiet and private. So off I went.