Don't let me die in Texas. Drag me to New Mexico. 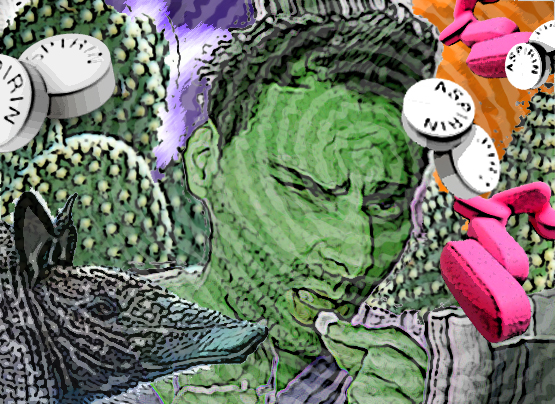 At first I thought it was just driving fatigue exacerbated by fighting the wind. Headache, eye strain, body stiffness... Then when I stopped for gas and walked around a little I realized it was more than just too much time behind the wheel. I was coming down with something.

I have flu-ish symptoms now and then. It could be every couple of years or maybe twice a year, whether I get a flu shot or not. It's usually mild. This was going to be worse than that. My digestive tract was starting to warn me that substances were thinking about leaving my body, and it couldn't guarantee which orifice(s) it would choose.

It didn't help that I'd had my fill of Texas and that traffic was a mess in El Paso. (Yay, they're hauling two prefab buildings down the center lane.) But I'd feel better—at least mentally—if I could make it across the state line. I like New Mexico. I feel more attuned to it, more at home. Home is a better place to be when you're sick. And, as I've written before, one of my favorite places in New Mexico is Aguirre Spring Campground. I could make it there.

I did. I chose a site and even though it was only late afternoon I dosed up on aspirin (for the aches and pains) and Benedryl (to knock me out) and crawled under the covers. I woke up seven hours later, feeling a little better. I self-medicated again and was down until after sunrise. I feel normal enough to create the art above and to write this blog post.