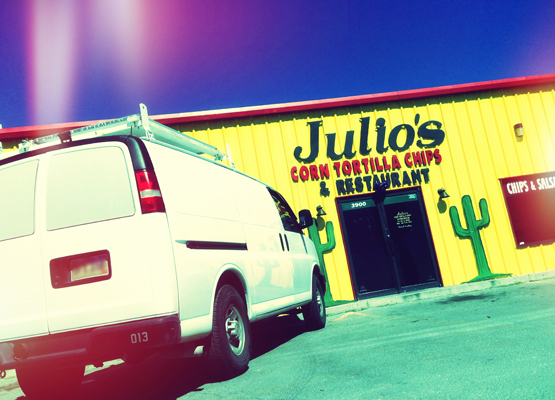 When a blog reader learned I would be passing through Del Rio, he/she said I should absolutely eat at Julio's. Okay.

Evidently the restaurant is sort of a side thing to their huge seasoned tortilla chip business. The joint isn't much to look at, but that's often a good sign the food is genuine and tasty.

Now, I've eaten a lot of different varieties of Mexican food, from Baja to Nuevo Leon to Quintana Roo to Oaxaca, from California to Montana to North Carolina. And lately in Texas, of course. Some of that Mexican cooking was wonderful, some barely qualified as food. So whatever opinions I have about Mexican and Tex-Mex food isn't from lack of sampling.

A foodie friend once asked me which of the world's great cuisines I'd choose if I had to eat only one of them for the rest of my life. He was aghast when I answered, "Mexican." I love the stuff. I think all he knew about Mexican food was Taco Bell.

As I scanned the menu at Julio's I knew I wanted something that required more skill and nuance than mere tacos, burritos or enchiladas. So I went with the bistec ranchero—diced skirt steak simmered with onions, chiles, garlic, tomatillos and tomatoes. It was served up with rice and beans (whole beans, not refried). Everything looked great.

The steak was chewier than it should've been. True, skirt steak isn't the most tender cut to start with, but done right it can pass for better parts of the steer. The flavor was excellent, though. Just enough heat to make things interesting without drowning out everything else. The beans were delicious. I would've preferred twice as much of them and half as much of the rice, which I think was mostly there just to fill up room on the plate. 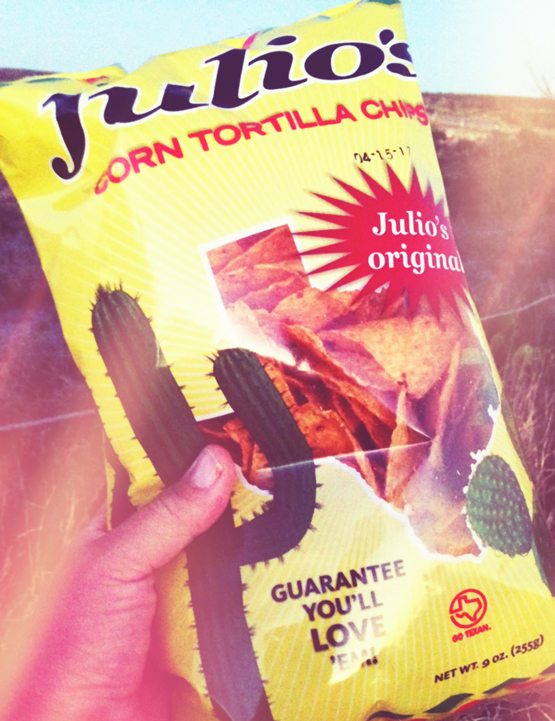 On the way out I bought a bag of their famous chips. Original flavor, to get a baseline reading on what the fuss was about. I saved them for dinner. Munch munch munch. Munch munch munch munch. Hmmm. These are exactly the type of tortilla chips a lot of people love. Thin, crispy, salty with hints of other seasonings. But, eh, I'm not a fan. The chips I get excited about are thick and almost too oily, like actual tortillas cut up and dumped in the fryer by someone's abuela. To each her/his own.

So, based on my single experience, I give Julio's restaurant a B and their chips a C+ on the Rather Biased Rolling Steel Tent Comida Mexicana Scale. That rating is subject to change after further testing. Or some mordida. Dollars or pesos accepted.