The lawless west of the Pecos 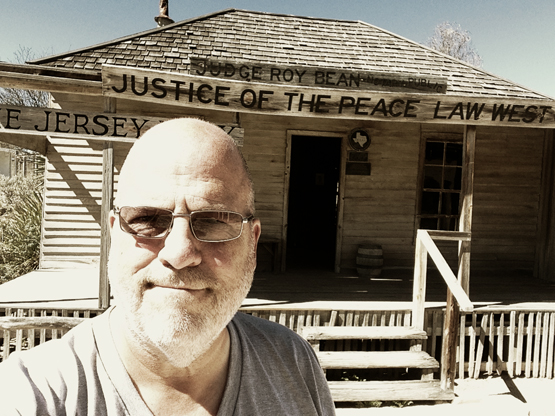 I doubt Judge Roy Bean used Helvetica for his sign

If you're driving US90 through Texas border country, there are three reasons to stop in Langtry. The first is to use a restroom. The second is to see the Judge Roy Bean Visitor Center and desert botanical garden. And the third is to camp in the large gravelly, grassy, shadeless parking lot of the community center. Not that you'd want to camp there, it's just that if you need a place for the night, that's where you go if you don't want to use an RV park. There's a suggested $2.00 donation. It was a bit of a fight getting my money into the box. It was stuffed full. It was like no one had emptied it in years. Or decades.

I had checked out Langtry via Google Earth and saw dirt roads/ruts looping out to the bluffs overlooking the Rio Grande. I had hoped to camp out there but the lady at the visitor center said it was private property. Oh well.

The visitor center has a few displays and several dioramas about Roy Bean and Langtry. Bean's quasi-authentic bar/pool room/courtroom is out back, with not much to see inside. If you come hoping for Old West reenactments with a Paul Newman look-alike playing Judge Roy Bean, nope. It's mostly a photo op. See, I was there.

Langtry is one of those middle-of-nowhere places that makes you wonder why it's there. I mean, hell, it doesn't even have cell service. Okay, the railroad went through and established a construction camp. Roy Bean showed up shortly after to set up a saloon (workers need their whisky, after all). Others came along and decided it was as good a place as any (because, I suppose, they hadn't seen many places) (or because they got drunk at Bean's joint and didn't realize they'd never left). Union Pacific eventually moved the rail line and its facilities, but some people stayed on, because they had sunk costs they didn't want to throw away, or because, again, they'd forgotten they were just passing through. Then the highway came along and those who'd stayed figured it would bring business and visitors. Eh, not so much anymore. Except for old farts like me wandering the West, needing a place to pee, get a little history and sleep.