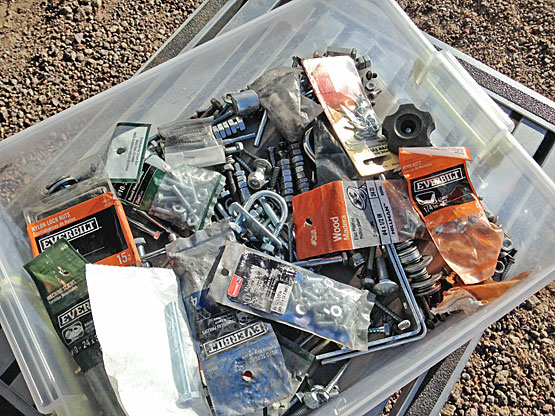 This is my box of fasteners. Once upon a time I had some of these in the tool box, some in the milk crate, some in the cabinet and some in a shopping bag stuffed in a door pocket. I gathered them all up and dumped them here. All my fasteners and hardware in one place—until I mess things up sometime in the future. 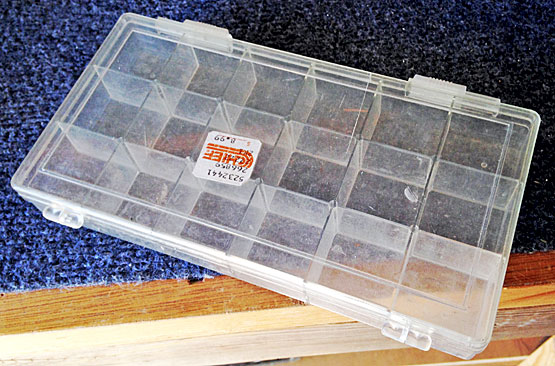 Lou offered me this compartmented box so I could have most of my fasteners sorted by size and type. That would make sense if I frequently needed nuts and bolts. But I don’t. So sorting them would be wasted time. An hour or so of organization now versus a minute or less poking around in the box on the rare occasions I actually needed something.

I believe we should be only as organized as necessary to function on a daily basis. More than that and we end up servants to the organizational system rather than the system serving us.

True, I occasionally forget where I put something. What I need is one place to put all the things I won’t be using for a long time instead of several special places that made perfect sense at one time, but the sense of which has been long forgotten. I should sort them by frequency of use rather than, say, similarity to other items. It might be a small hassle digging through off-season clothing, tax papers, spare bulbs and owner’s manuals until I find, say, the stapler, but it’s better than moving the stapler out of the way each time I need a pencil or Post-it note. The long-term storage items could be shoved way under the bed and ignored instead of taking up room that could be better used by things I need often.

I think the key to “a place for everything and everything in its place” is accepting that the place for some things is that random pile over there.