My closest neighbor here at the Hi Jolly dispersed camping area is about twenty-five yards to the west. And there’s a guy tent camping about thirty yards to the east. Nice and roomy. No encroachment. Enough vegetation between us to maintain a little privacy. Excellent boondocking etiquette. 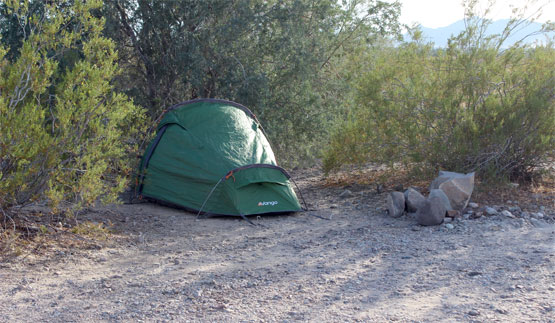 Then a couple in a 40-foot RV, towing a car, cruised through looking for a spot. They stopped with their “towd” right in front of my neighbor’s tent.

Granted, it’s a small tent, and green like the bushes, so it wasn’t as easy to see as the yellow four-person tent on the other side of the camping area. But it wasn’t invisible—if one was paying attention.

The tent guy was away, so I walked over to explain the situation to the RV driver before he could deploy his levelers and slide outs.

“This area is already taken. There’s a tent back there.”

“Next to that bush. Your car is right in front of it.”

“He still needs to get his car in there. Besides, you’re really crowding him. Why not move about half way down to the next rig so everyone has some privacy?”

Mr. RV was far from happy, but he moved—running over a waist-high creosote bush in the process.

The other people here with large rigs are observing etiquette. Lots of space, except when they’re clustered with friends in micro-villages. So this guy’s behavior isn’t universal with big RV owners.

Maybe no one has ever explained things to him. Maybe his concept of “space” has been grossly distorted by campgrounds and RV parks so cramped your slide outs nearly touch your neighbors’ and you can hear each other pee. Or maybe he’s just too self-absorbed to see beyond his own desires. I can give slack to cluelessness, but narcissism gets my hackles up.

Who knows. Maybe he’s blogging about the self-important jerk who chased him from a perfectly good camping spot.