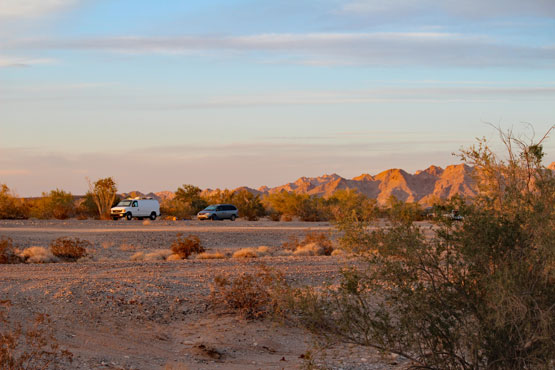 When I returned to the southeast corner of California, the Imperial Dunes were crowded with ATVers enjoying a long New Year's weekend. There were far more RVs and travel trailers in the dispersed camping areas along Ogilby Road, what with it now snowbird high season. And there was also a smattering of vans by American Girl Mine. Some of them were plain white like the Rolling Steel Tent, some were conversion vans with stripes, some were SUVs and minivans. They all had solar panels, which is usually a good indicator they were full-time nomads, probably hanging here until the Rubber Tramp Rendezvous up the highway in Quartzsite starting the eleventh.

I picked a camping spot across the wash from them because I was in the mood for solitude. After two days of wondering whether I knew any of the van dwellers, but not wanting to experience the social awkwardness of discovering they're strangers, I got out the binoculars when I saw one of them outside.

Oh, it's Debra. And that's Robert. So I walked over to say, "Hi!" Debra walked me over to Yolanda and Scott's Airstream (I had met them briefly a couple of years ago) and introduced me to four others who's names I've already forgotten, except one was from Montana, one from Pennsylvania and one from Ohio. (I remember facts better than names, which is another sign of my social awkwardness.)

I'm writing this at about 6:30PM and the others have gathered around a campfire to chat and welcome the new year. I'm not there, because I don't want to end up smelling like wood smoke. And, like I said, because I'm socially awkward. Oh yeah, and solitude! That sounds much more well adjusted.