I use a lot of cellular data because I’m addicted to the interwebs. I also use Verizon because they have the best coverage out in the boonies.

From time to time I dive into various forums to learn what the best deals are. But there’s always something wrong with them. No unlimited data, or only 3G, or only on a phone with no tethering, or on a carrier with spotty coverage, or requiring a lot of work on my end. (Get the used hot spot from this company, the SIM from some sketchy eBay guy, pre-paid activation through this other outfit, do the hokey-pokey and turn yourself about…) 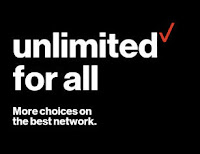 For me the Holy Grail has been unlimited, unthrottled, 4G, with a phone and a hot spot, on Verizon, for less than I’m paying now. Verizon started offering an unlimited 4G plan a few months ago, but after using 22GB I would be subject to prioritization (shoved to the back of the line) when cell traffic is high. So I stayed with my existing plan, even though it meant being careful with my data usage toward the end to the month.

Today, however, after comparing how much data I had left and how many days remained in the billing period, I decided to switch to the less-than-perfect Verizon plan. I’ll see how it goes. If nothing else, I’ll be paying $35 less each month.