Getting north from last night's camping spot started with morning commute traffic into Jackson WY. If I had wanted to punish myself further I could've continued north through Grand Teton and Yellowstone parks. But I took the road west, over the mountains and into Idaho.

Perfect idea. Except for getting stuck in a line of traffic behind a large dump truck. It pulled over at the summit. Yay, except if it were to lose its brakes coming down the 10% grade, I would be in front of it. That didn't happen, though, because I'm writing this instead of being hauled from the bottom of a cliff.

What did happen was getting stuck behind someone whose sacred duty was to drive way below the speed limit and not use any turnouts.

That driver turned off just in time for the series of small towns with low speed limits. Hey, this route is a bypass, not a shortcut. Besides, it allowed me to visit the giant potato in front of the Spud Drive-In Theatre in Driggs. (Hmmmm, put a door and a couple of windows in that and I'd have a replacement for the Rolling Steel Tent.) 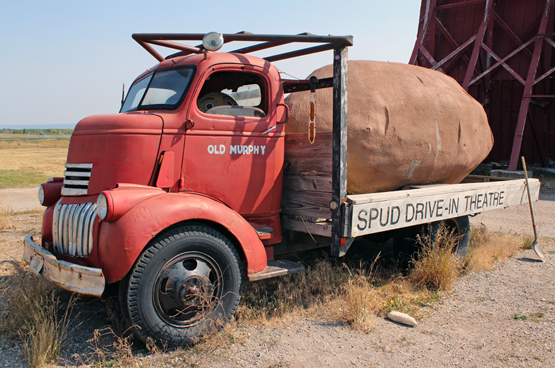 Things went well from Ashton until West Yellowstonewhere I once again found myself behind a slow-driving shunner of turnouts. It got so bad that I used a turnout just to get some space between us.

That means I'm in again Montana. We have some history together, which I'll cover in the next post.