I downed some biscuits and gravy at the hotel's free breakfast, gassed up the Rolling Steel Tent and took off west on I-40. I turned south at Holbrook, and at Show Low I jumped on US 60 to Globe. The goal was Buckeye Hills Regional Park just west of the Phoenix metro area. It makes a nice overnight stop because, among other things, it's free. 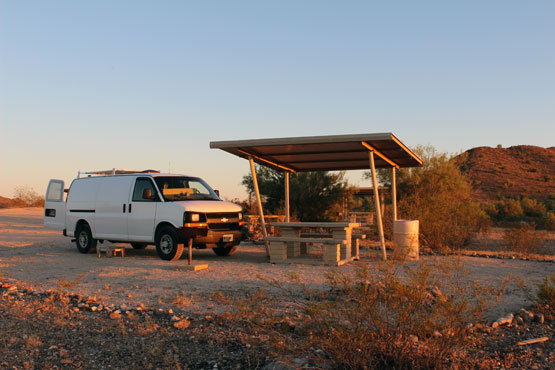 I hadn't driven the leg from Show Low to Globe before. It's one of the routes down off the Mogollon Rim, which sort of divides northern Arizona from the southern, lower, hotter, part of the state. Along the way is dramatic Salt River Canyon. I hadn't known anything about it, but it brings out the Sunday crowds.

As with many long drives, the last part of this trip felt the longest. I've driven between Globe and Phoenix—and vice versa—several times, but the distance between landmarks seemed farther today. Aw man, I'm only at Apache Junction? Only in Mesa? Tempe? But I made it. I'm fine. I had a late lunch and napped and adjusted to the time zone change. Gee, it got dark early.