You might recall my struggles with installing the Rolling Steel Tent's serpentine belt. Twice. The main problem was not being able to see most of what I was doing. Well, today I saw an engine swap video. They pulled a 5.3 liter version of GM's V8 out of a project car. It's externally identical to the 4.8 liter engine in my van. And there, presto, was a great shot of all the pulleys and the routing of the serpentine belt. If only I'd seen this weeks ago. Things would've been a lot easier.

So for you owners of current-generation Chevy and GMC vans who want to replace your serpentine belt, here's that shot with my enhancements. 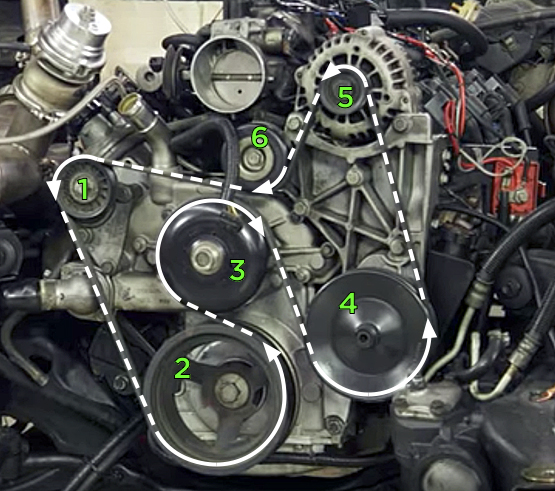 Pulley 1 is the belt tensioner. You slip a 15mm wrench on the center bolt and pull to the right to loosen the belt. Then you jiggle and pull the belt until it comes free. That's the easy part.

You still need to do a lot of this by touch, and the belt will fight you. And you might need to get under the van to make sure the belt is properly aligned on pulley 2. But if I can do it without this diagram, you should be able to do it with the diagram. And with less swearing. Much less.