Trying to do the right thing

It was night, I was camped on Willow Springs Road north of Moab, and I smelled smoke. I had been smelling smoke for two weeks in Montana, Idaho and Washington, but this was fresh smoke from somewhere nearby. I got up and looked around. There was a group camped about 300 yards away. They had a fire going. What? Are they crazy? Clueless? Are they the type of people who are going to do whatever they want even though they know there's a fire ban?

I fumed. I thought. I fumed some more. I went online, looking for a number to call to report situations like this. All I found were office numbers for various agencies, and it was well after business hours.

Do I call 911? Does something like this fall within their concerns? Would they at least be able to give me the right number to call? What other choice do I have?

I told the woman the situation.

She took my name and number and said to hold on a moment.

She was back in about five seconds. "My current information is that the BLM has lifted the fire ban in that area, as long as they're in a legal camping spot."

"Well, it's all dispersed camping out here, with old fire rings made by past campers."

"But they're not in the middle of the road or anything like that, are they?"

"Then it should be okay."

"But let us know if it gets out of control."

My dreams of rangers and sheriffs and SWAT teams smacking the campfire people around and hauling them away were dashed.

On the other hand, it's not like there was a lot out there that could burn. A few tufts of grass, some sage, rabbit brush, an occasional mesquite or tamarisk tree. Mostly dirt and rock. Maybe that was why the fire ban had been lifted. 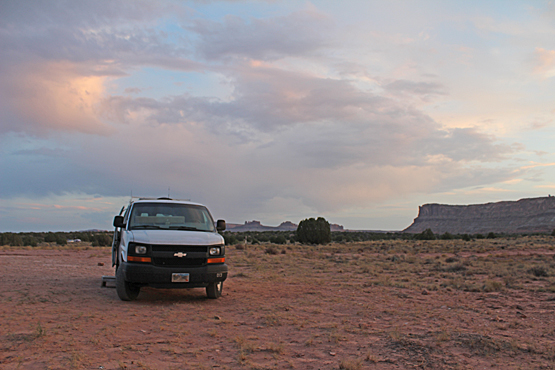 But I kept my eye on the campfire. It was getting smaller. That was good. Whatever type of people they were, they weren't the type who dump gasoline on pallets and mattresses and tires and roadkill and go WOOO!!!! At least not that night.